With aging, childbirth and changes in hormonal status over 50% of women will develop urinary incontinence and prolapse. Those diseases of pelvic floor may be treated non-surgically and surgically. For many years pelvic floor surgeries surgeries were preformed using patients own tissue (native tissue repair), but in 1996 first polypropylene pelvic mesh for treatment of stress urinary incontinence was introduced. It quickly replaced traditional surgical procedures and mesh based procedures became the mainstream treatment for stress urinary incontinence in women. In 2004, mesh for treatment of pelvic organ prolapse was introduced and soon after FDA started receiving information of patients who have developed problems after this surgery. In 2008 FDA issued the first warning regarding the dangers of pelvic mesh; in 2016 pelvic mesh was reclassified as type class III device requiring extensive research before brining devices to the market and in 2019 polypropylene mesh for pelvic organ prolapse was taken off the marked altogether. Polypropylene mesh used in retropubic and transobturator slings continues to be used for treatment of stress urinary incontinence.

Many patients who underwent implantation of polypropylene mesh either for incontinence or prolapse are satisfied with the procedure and do not have any complications. When complication occur, they may range from transient discomfort, to more significant complication of erosion, to absolutely debilitating neuropathic pelvic pain. Some patients also develop significant autoimmune reaction to mesh, which may add to the devastating pain they already experience.

Even though severe pain after mesh implantation is rare, when it happens can be completly incapacitating to the patient. This pain may be caused by muscle spasm, nerve injury, inflammation, scarring or foreign body reaction.

Direct nerve injury is one of the most serious complications of mesh implantation. This injury may occur with mesh kits that were designed to attach to, or pierce through the sacrospinous ligament. Anatomically pudendal nerve runs behind the sacrospinous ligament, so any mesh that attaches to this ligament is at risk of injuring the nerve. Mesh kits that attach to the sacrospinous ligament include Prolift, Avulta, Pinnacle, Uphold and several others. Even though the surgeon is advised to place the mesh at the certain distance from the nerve, the blind placement makes it virtually impossible to know the exact location. Patients who sustain direct injury to the nerve will generally experience immediate and severe pain upon waking up from surgery. This type of injury is a true emergency and mesh needs to be removed as quickly as possible to avoid permanent damage. The surgery does not only involve removal of the mesh, but decompression of the pudendal nerve which has to follow. This procedure, therefore, has to be performed by a surgeon who is very knowledgeable in preforming transgluteal pudendal nerve decompression. 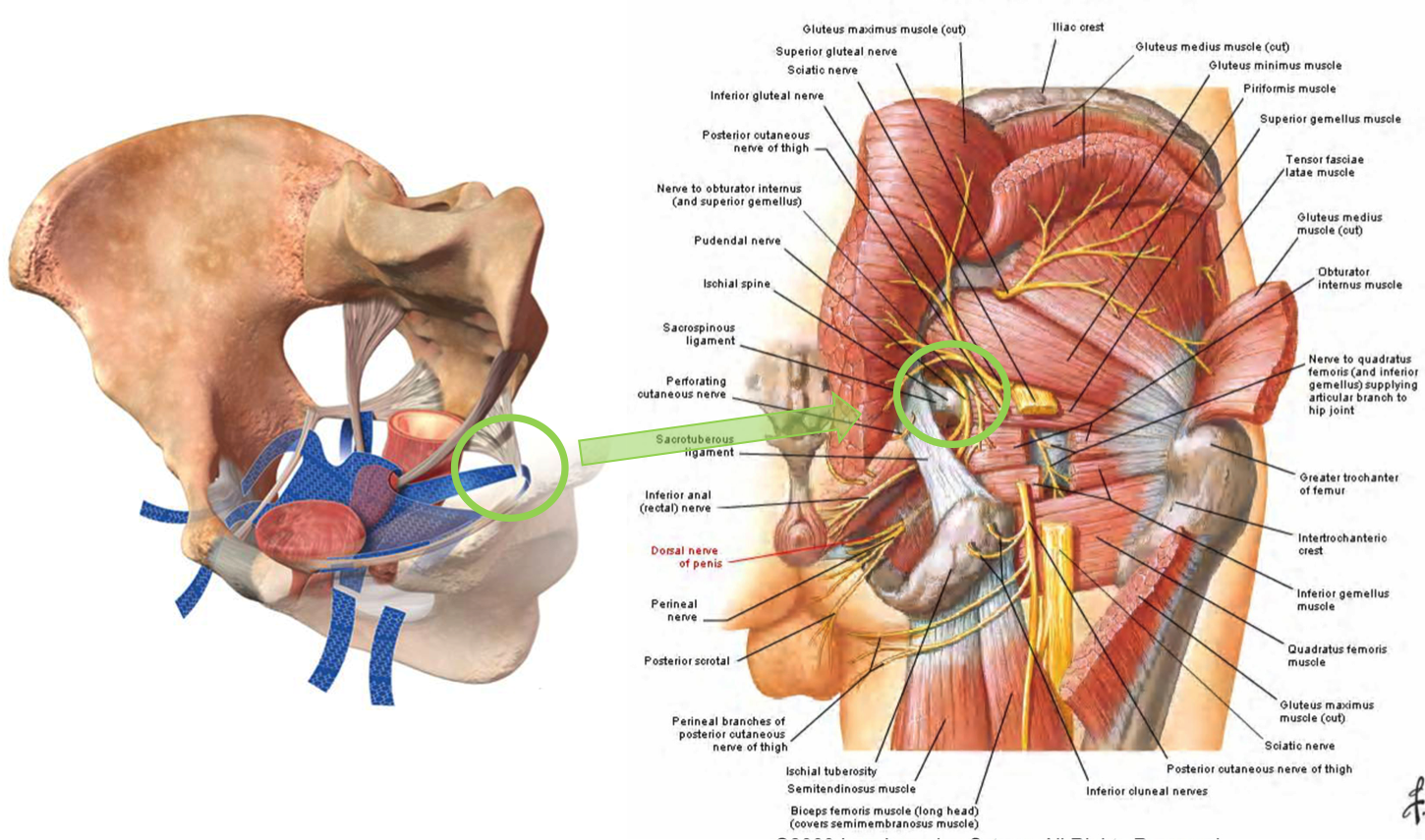 Muscle spasm and delayed nerve injury involves mesh kits that perforate or attach to different pelvic muscles. When woven polypropylene mesh is placed in the muscle it is causing it to spasm through mechanical irritation. With time mesh shrinks adding to even more irritation and spasm. This explains why sometimes pain starts months to years from implantation surgery. Transobturator meshes include products like TVT-O, Monarch, Obtryx, Elevate, Prolift and many, many others. The older transobturator meshes were designed to pierce through several muscles in the groin including obturator internus muscle and exit on the skin of the thigh. In case of those mesh kits, the adductor muscles (muscles that bring legs together) are often affected, so patients experience groin pain with walking and almost any movement of lower extremities. 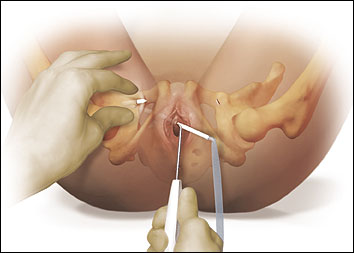 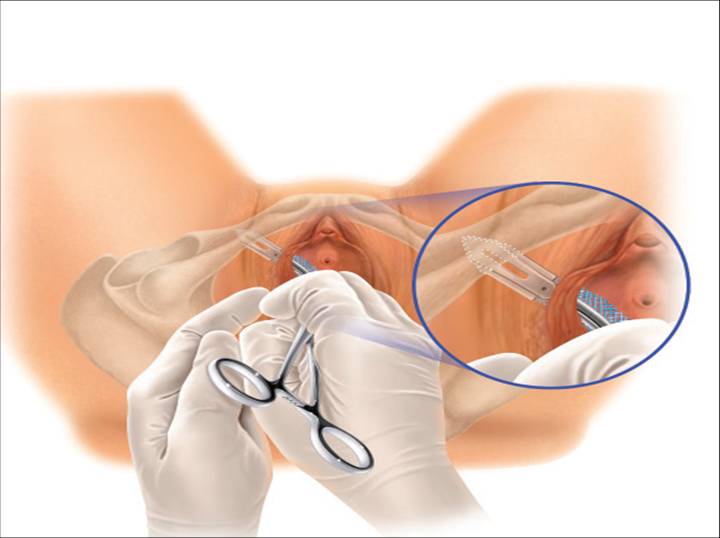 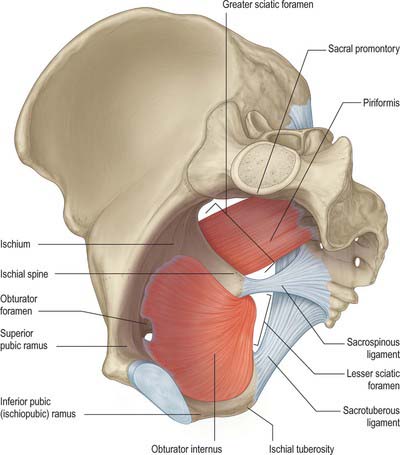 Pudendal nerve runs through the obturator internus muscle through the part known as Alcock’s canal. When obturator internus muscle is spasming it is putting pressure on the pudendal nerve in the Alcock’s canal giving patients symptoms of pudendal neuralgia such as burning pain in the perineum, rectum, clitoris and vagina which is typically worse with sitting. 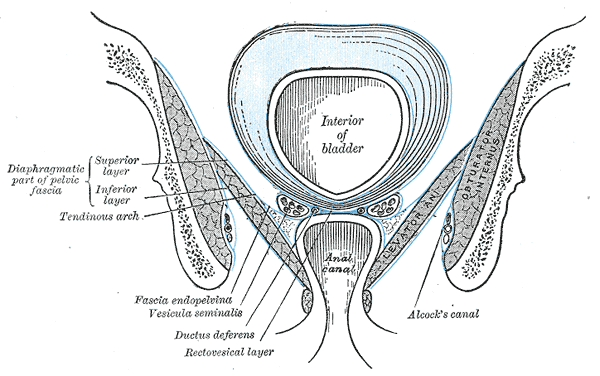 In my practice close to 50% of patients who have developed pain after mesh placement have also developed new onset autoimmune condition which they did not have prior to the mesh placement. Most common conditions observed were Sjögren syndrome, lupus and Hashimoto’s thyroiditis. Patients often experience unexplained rashes on the legs, arms, muscle aches and fatigue. Symptoms are usually quite debilitating and not amenable to treatment unless mesh is removed. Fortunately, when mesh is completely removed autoimmune symptoms improve

If patient has symptoms of nerve injury (pudendal, obturator or other pelvic nerves) it is of utmost importance that she is treated by a provider who specializes in treating mesh complications, preforms complete mesh removal surgery, but also is knowledgeable in pelvic nerve injury and surgical nerve decompression. Dr. Michael Hibner is the only provider in United States, who is board certified in Female Pelvic Medicine and Reconstructive Surgery (urogynecology) who performs complete mesh removals and specializes in pelvic nerve decompression surgery.

Removal of mesh from pudendal nerve

Dr. Hibner strongly believes that it is the arms of the mesh deeply embedded into the pelvic muscles that have a potential of causing severe pelvic pain. Removing just the vaginal part of the mesh in most of the cases is not going to help with pain. It is the arms that need to be removed in order to help with pain and it may be much more difficult to remove those arms if the vaginal part has been previously removed. It is best to remove the entire mesh in one piece during the same surgery. The complete mesh removal is also very important in patients who have developed autoimmune symptoms after mesh placement. In order to alleviate autoimmune symptoms every piece of polypropylene has to be removed.

If you or someone you know have developed pelvic pain or autoimmune symptoms after mesh placement call our office 480 599-9682 to learn more about available treatments.

Scroll to Top
We use cookies to ensure that we give you the best experience on our website. If you continue to use this site we will assume that you are happy with it.Accept